Back to the FuelManager home page. 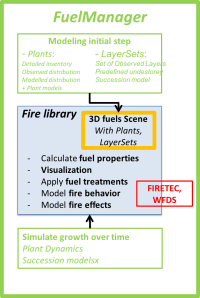 FuelManager mostly relies on the fire library. The initial step has to be defined using the different input format available (see below) to generate the fuel items to be included in the scene. Fuel treatments and evolutions can then be simulated. The scene can be visualized and fuel properties can be computed in the 3D Editor. A scene can be exported to the input format of FIRETEC and WFDS, which are two physics-based fire models. 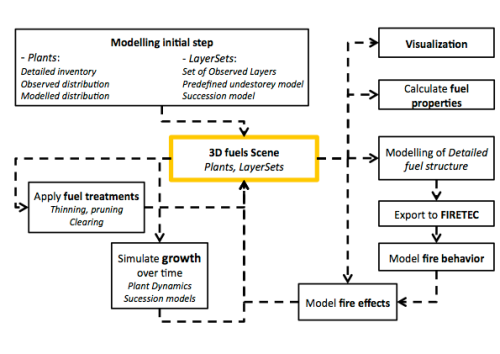 Two different types of items can be added in a scene: Plants and LayerSets. 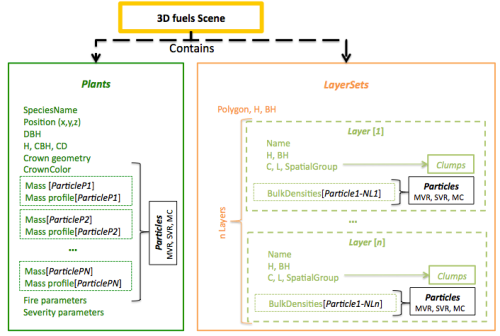 Several input file formats can be loaded from the initial dialog of the GUI.

The parameters and equations required to parametrize a new or existing species are defined in a file called speciesFile that is read by the model when runs in data/fuelmanager/speciesFile. Other speciesFiles than this default can be selected from the initial dialog. 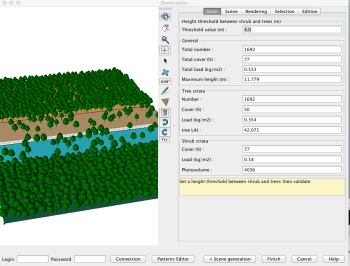 The 3D editor is opened after a scene has been loaded. It has several functionalities:

Viewers and Graphical outputs available under a project step

Several viewers and graphical outputs are available under a project step.

Among the most useful viewer and graphical outputs in the context of the Fuel Manager:

Specific interventions were implemented in the FuelManager. Among them: 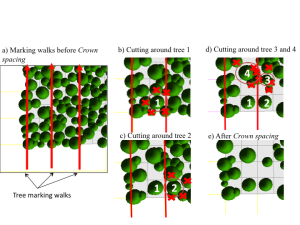 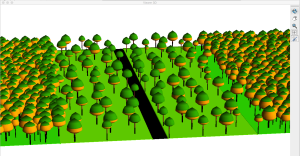 These interventions can be applied to the whole scene or to a group of trees or plot cells.

Several other interventions are available. Among the most useful in FuelManager:

Using growth model for Plants and succession models for LayerSets (details of parametrization here), the evolution of the scene can be simulated. Currently, the Aleppo pine growth model of Dreyfus et al. (2001) and a succession model for kermes oak garrigue (LayerSet) are the only models available for evolution. Since these models are hard coded, the implementation of new growth models requires development in the module. On the image below, the evolution from yellow to green of the layerSets in the fuel-break illustrates biomass accumulation.

Fuel manager projects can be created, managed and configured as every Capsis project.

A script that loads a scene from a file with From Field Parameter format and exports it to Firetec monofuel can be loaded thanks to the command :

Other scripts are available.